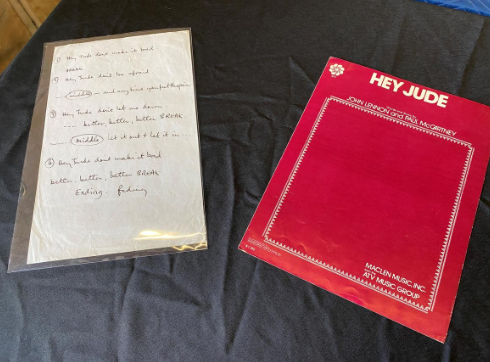 LONDON (Reuters) – Pop memorabilia including Paul McCartney’s scribbled notes for “Hey Jude” and Doris Day’s piano have enjoyed a sharp rise in online interest, possibly because so many people are cooped up at home under coronavirus lockdown, a leading auctioneer said.

Darren Julien, founder of U.S.-based Julien’s Auctions, said activity including bidder registrations, bids and catalogue orders was ten times the normal level ahead of two auctions due to take place in April.

Some of that demand was coming from Italy and Spain, he said.

“When Italy shut down early last week, we’ve noticed a spike of Italians registering to bid and buying catalogues,” Julien told Reuters in London on Monday.

“People are looking for a reason to be happy and excited and get out of the routine of being locked up in their homes.”

Tens of millions of Europeans are in lockdown, as governments try to stop the spread of the coronavirus which has killed more than 6,500 people worldwide.

Julien added that pop memorabilia might be seen by some as an attractive alternative investment while stocks, oil and other markets tumble.

FILE PHOTO: A sheet of paper with partial “Hey Jude” lyrics, written by Paul McCartney for a recording session in 1968, is displayed in a Julien’s Auctions warehouse in Torrence, California, U.S. March 5, 2020. REUTERS/Jane Ross/File Photo

“We noticed when the stock market crashed in 2008, we had a record years in 2008 and 2009, and that was because people with wealth were looking for ways to diversify,” he said.

In a separate sale, bidders can also buy Day’s four Golden Globe awards, her piano and a collection of gowns.