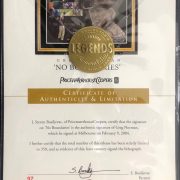 Description: This was the first ever official personally signed memorabilia release to be endorsed by Greg Norman.  Norman is one of the greatest golfers the game has produced, He  was christened the “Great White Shark” by a newspaper reporter in 1981, who likened his killer instinct and ability to strike to the ocean’s most feared creature.  Norman is a true Australian sporting icon – boasting 91 career victories including 2 British Open and 20 USPGA titles as well as a place in the World Golf Hall of Fame.

This superb limited edition lithograph personally signed by Greg Norman
This superb lithograph shows Greg Norman in action and is surrounded by a series of historical shots from his brilliant career.  It comes beautifully mounted and framed and is still in the original box.